Honolulu, HI. – Despite relatively flat scores since the previous assessment, Hawaii fourth- and eighth-grade students demonstrated great gains in the 21st century on the 2017 National Assessment of Educational Progress (NAEP), or The Nation’s Report Card.

The National Assessment Governing Board (NAGB), who administers the assessment, released NAEP scores earlier this week. The last round of scores was published in 2015. By comparison, eight grade reading scores saw a four-point increase, while the other three assessments were not significantly different from those in 2015. When analyzing Hawaii’s long-term scores, however, it become clear that tremendous growth is being made. In fourth-grade math, for example, the percentage of students scoring at or above proficient has nearly tripled since 2000. In eighth-grade math, that same number was nearly double. 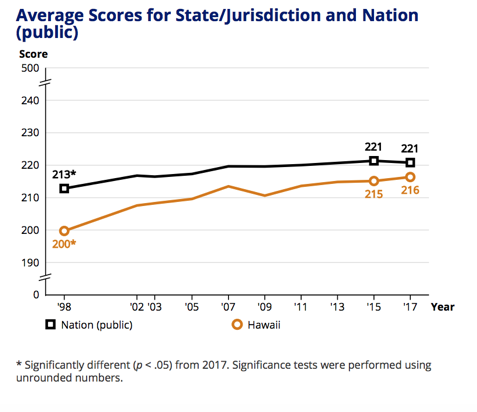 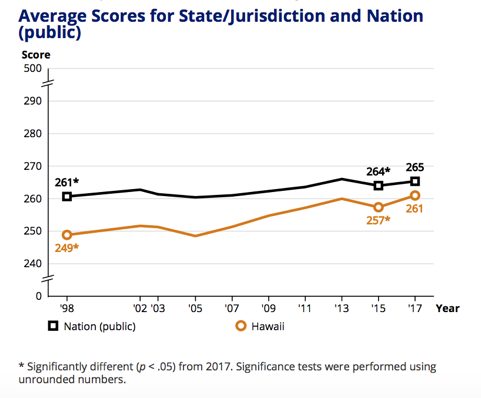 Still, across the state, just over a quarter of Hawaii’s eighth graders are proficient in math and reading, and our average scores amongst all four tests has never surpassed that of the American public. Equally troublesome is the gap facing our underserved students, including Native Hawaiians. For instance, on the fourth-grade reading assessment, 50 percent of white students scored proficient or advanced compared to just 16 percent of students identified as Native Hawaiian or Pacific Islander.

“While there is often a negative narrative about our public schools, I hope we can recognize the clear progress Hawaii has made over the last two decades, through the work of so many dedicated teachers, administrators, leaders and organizations – and of course, students and families,” said David Miyashiro, founding executive director of HawaiiKidsCAN. “It is clear, however, that we still have much work to do to ensure all of our students have an excellent and equitable education.”

Our key takeaways from a review of NAEP data include: